NEW TRENDS OF THE OLD COLONIAL RULE OF GREAT BRITAIN!!! 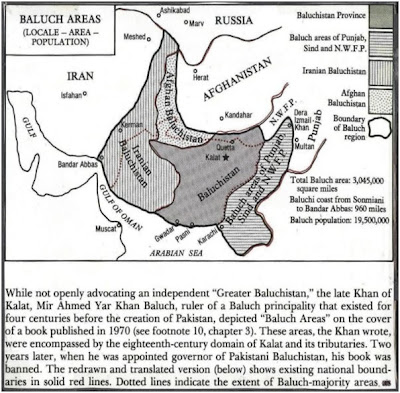 Here are some new findings that we have obtained through the western alliance on war against terror. It is extremely important for our struggle for full freedom and full independence to know what is happening in so called Pakistan and in our beloved occupied country of Balochistan. We through our findings found out that the so called independent Pakistan is divided between allied forces on the followings:

Pakistan, right now, when, I am writing these words, is divided in two zones of interests and administration areas. From the northern borders of Balochistan , Multan and upwards is on the responsibility and control of the United states, and from Balochistan`s northern borders, downwards to the Makoran sea, is under the responsibility and control of the British.

I don`t know, but due and according our (The Baloch) experiences and the historical documents and facts, the behaviour of Great Britain, towards Balochistan has not been a good and fair one. The British after the division and independence of the subcontinent, have committed treason and crime against this poor nation, by adopting double moral, double language, caused, all miseries of suppression, humiliation, crushing our national will of independence and freedom for all these long 62 years. This is in addition, to their direct colonial rule, when they adopted policy of protection of Balochistan, by cheating to them. The British, know very well of their dark colonial history. Where, they just, divided Baloch land and gave parts of it to Afghanistan in order to get some favours and parts to the Persians, as, it was their mothers property.

I hope, some reasonable and fair British decision maker reads, these words and suggest to his / her government, do some good for these poor people too, not only, suppression, humiliation, and suspending their national aspirations for independence.

If we take previous British record in Balochistan I see this division on the disfavour of Baloch. Why? Read, the foreign policy office`s report of 2006, with historical references and documentation. Where, the British, signalled to the newly, artificial created Pakistan, that do not make any agreement, with independent Balochistan. In other words, she gave green light and blessing to this GHADDAR nation of Pakistan, annex, free and independent Balochistan by naked force and aggression!!! While, the ink of their own signature, on which they had agreed for the independence of Balochistan was not dried out yet, they betrayed, the Baloch. They, (the British) even did not bother, to evaluate, their previous brutal actions against Baloch.

I hope, some of these fair, reasonable British, at least once, when it comes to Balochistan, rolls back their negative history back, just for once in favour of Baloch and Balochistan.

I am afraid once again, the British, will come and betray us. Because there are some signs, of Pakistans governments public statements, which says, that they are holding talks with Baloch in order to solve the miseries of Balochistan. While us all, the Baloch know that, none real Balochi leader or Party is ready to talk to Pakistan. These statements of Pakistani government have some smells of the old British policies to divide and rule.

It is crystal clear, that no Baloch, will sit on one table, and in a hidden room to talk to Pakistani government!!! We all know, even a Baloch kid of 10 years, knows, what the Baloch up to. So, how shameless these Pakistani leaders are, to claim holding talks with Baloch????

No, Baloch, accept anything less than independence; there simply is nothing to talk with Pakistan. HHHnnn, yes,, there is just one thing that the Baloch leadership, and the Baloch representation should talk to Pakistanis, in an open meeting, where it should be arranged and supervised by the United Nations, in Geneva, London or New York or any other place, just to set a time table for the withdrawal of Pakistani forces. And where, Pakistan should accept, to hand over all those personnel in his army and spies agencies, committed crimes , genocide and acted against humanity, either to baloch court of justice or to international court of justice in the Hague.

I know, that, some Pakistani establishment, will bring me in question, who am I, that I set such conditions? To their answer, I have to tell them, I am the grassroots of Baloch society. To prove that, let us show you, when the free election held in Balochistan, to whom they vote, and whom they listen.

I REPEAT IT AGAIN, EVERY BODY SHOULD KNOW, AND THAT NO BALOCH IS ENGAGED IN NEGOTIATION WITH PAKISTAN. PAKISTAN IS SIMPLY LIEING BECAUSE PAKISTAN HAS LOST THE BATTLE, AND SHE IS SIMPLY DESPERATE, TRYING TO SAVE FACE. SO, ALL THOSE WHO HAS DOUBTS IN THEIR MIND, BE ASSUERED THAT NO BALOCH WILL TALK TO PAKISTAN. THERE IS NOTHING LEFT TO TALK ABOUT WITH PAKISTAN. THE ONLY THING IS LEFT TO AGREE UPON IT, IS THE TIME TABLE OF THE WITHDRAWAL OF PAKISTANI OCCUPYING FORCES FROM BALOCHISTAN.

AND FOR THIS VERY IMPORTANT ISSUE, BALOCH ARE READY TO MEET THE PAKISTANI COUNTER PART, WHERE EVER SHE IS READY, EXCEPT ISLAMABAD AND PUNJAB.

The goal of the meeting also should be announced prior to the meeting, and it should be presided by UN, EU and other international observatories and witnesses. Sooner Pakistan accepts this only condition of the baloch, better. Other ways, much more innocent blood will shed unnecessarily.

It should be, crystal clear on the minds of Punjabis, forget, those all plundering, and enslavement of Baloch people!!! We will bring to justice all those culprits.

It may seem for you today, impossible for Baloch to do so. But me as a Baloch, see this 100% possible, to bring to justice, all Pakistani military or civil person who has committed genocide, and crime against humanity in Balochistan. Here, I address again, the British who have surfaced directly and physically in Balochistan, where they left us enslaved after their departure, retaliate of their past undoing.

It should be clear, that, if the 220 million strong nation of Indonesia, could not, resources, one million Eats Timur enslaved, then they have to rethink, if they have the slightest doubt about Baloch and balochistan. And the world, should know, that, we, the Baloch in that area, have faced the violence, cruelty and brutality of the Pakistani army. By that we mean, this army is equipped by Saudi and other Arabic money on the name of Islam. They should remember we are Muslims too. And the same army is being equipped by the American and British weapons, which is using these equipments and money, against us poor Baloch. Who have done nothing wrong against any other people in the world? We the Baloch, always, restrained ourselves, by not taking this violence outside Balochistan.

We are waging a defensive war in our own home which is inflicted on us by Pakistan, with American, British weapons and Saudi and Emirate money.

In every war, the defending part has the right to attack the enemies in all fronts. It means and includes, attacking the income sources of the enemy, and here you know what I mean. And this part and this threat is my own personal view of point, most Baloch do not agree with me on this point, to bring war out of Balochistan`s borders, and take it there Pakistan gets finances, and destroy those finances, in order to defend ourselves.

We, the Baloch who live outside Balochistan, have a mission and duty by informing the public of host countries, to what is happening in our country. It is not a big job, comparing to those SARMACHARS, who are sacrificing their lives to our common cause. It is our duty, each and every one should allocate just one hours work daily for national cause. In this one hour, one can inform at 5 people on the street of the host country to what is happening in our country.

We should also, approach the host countries authorities and ask them, stop helping Pakistan, because whatever aid Pakistan gets, it is going to its military. And Pakistan`s military is itself, the source of problem. For example the same Pakistani army is promoting the very same ideology of Islamic fundamentalism. The same army is harbouring both the Taliban and Al Qaeda figure heads, by placing them in Balochistan. Because, Balochistan is the only place in region, where fundamentalism, has not taken roots, due to its people`s secular nature.

I ask, the allied forces, on war against terror, to scrutinize their policies towards Pakistan. And it should be clear to them, which, without peace in Baloch, the war on terror will not succeed. And an independent Balochistan, will play a crucial role on uprooting these terror organisations. The biggest of all of these terror organisations, is Pakistan`s army and it`s terrorist intelligence agencies.

It should be clear to everybody, that Pakistan will never fight Taliban and al Qaeda, because these organizations are assets, and reason of getting money, and black mailing western alleys in order to get more and more money.