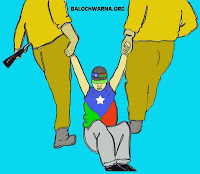 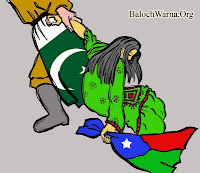 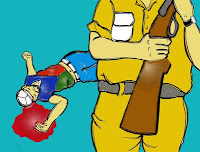 Pasni: (September 19, 2009) Habibi Jalib Baloch stated, “our party will not be part of any negotiations with Islamabad till end of Balochistan’s military operation, withdraw of forces, and act to bring the disappearance people in surface”. He is the central general secretary of the Balochistan National Party (BNP, Mengal).
It’s our demand that the United Nations peace keeping forces should be placed and the aggression forces should be withdrawn. He further stated that Musharraf (former President, Dictator of Pakistan) left a gap between federation and provinces, he was freely let go by (present Pakistani civilian rulers) while he ran away from the country with ease.
In Balochistan day by day the list of disappearances is increasing. He stressed according to the United Nations charter of rights that in any region of the world, if nations are being oppressed and kept as a slave, they have rights to demand for the separation and establish their own separate state. Source: Daily Intekhab - Translated: BalochHomeland.
Analysis by Ali Raisi recevied via e-mail (September 19, 2009) "Let us see and do a simple analysis of the situation. On what basis Pakistan want to hold talks with the Baloch? May be the Pakistanis, have in mind, to convince or tell to their Baloch counter part, ok, we accept that Pakistan’s attitude and behavior towards the Baloch, have been, cruel, unfair and violent. And this time, we will do our best to correct those mistakes, and we the Pakistani establishment are ready to meet your demands of full autonomy, ok?
Then, what this argument in practical terms, mean for the Baloch? It is crystal clear, that it means, accept, that we the Pakistanis, want to keep enslaved for another definite time. And a Balochi kid, understand, that holding talks with Pakistan for less that full independence, means, accepting the status quo, of today and remain enslave. And let the Pakistan, to destroy the culture and national identity and change Balochistan` s homogenous demographic state against the interests of Baloch and Balochistan.
The question remains, is there any Baloch, to accept this? Is there any Baloch go for so called full autonomy and remain enslaved again? Who wins in this situation, the situation, remaining in the so called Pakistani federation? It is definitely clear, the winner is Punjab. Because, Balochistan remaining in the federation of Pakistan, is a vital interest for Punjab. Balochistan, has a little population, compare to Punjab or any other province of Pakistan, and has natural resouces, which could feed a population of a billion people. So, how Punjab, is ready to give it up so easily.we all and the world knows that Balochistan, not by the consent of it`s people have been occupied by naked force. So from the beginning this annexation, according to all norms, and international laws and agreements, an unlawful act.
The Baloch, should by all available sources they have help and support their defensive forces. And no Baloch is allowed to hold talks with Pakistan, aiming keeping Balochistan in Pakistani federation, because Baloch never accepted that. If there will be any talk, it`s goals and agenda should be announced prior to any meeting, and the aim and goal should be independence of Balochistan, nothing else. And these talks should be open, supervised by international body like The United Nations, EU and UN Security Council and not in Pakistan."