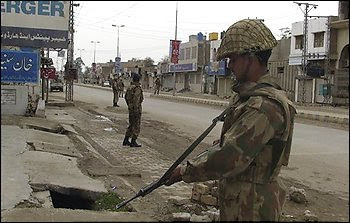 According to the reports received by Sagaar an unofficial curfew has been implemented in the area of Tump, Balochistan. The announcement was made from the loud speakers of the mosques in the area, which announced shot at sight for the people who violated the curfew, the residents of Tump are asked not to leave their houses after 5 evening till morning or else they would face fatal consequences, this announcement was made by Pakistan army and a large number of force has also been deployed in the area.

In order for the viewers to have a better understanding of the consequences of this decision of Pakistan army, they should be knowing that in Balochistan the houses are built far apart from each other and the houses are mostly one room buildings where a father lives in one room and the son in another with a distance of 50-100 meters of his house, In the similar way the kitchens are built with similar distances which means that after the financially broken Balochs of Tump would enter the one roomed homes at the evenings would be literally in a “jailed” condition. The people would not also be able to go to offer their prayers once the curfew time starts.

This attempt of Pakistan can be seen as an attempt to jail whole cities in order to suppress the voice of Baloch nation, and this act shows how much is the army afraid of common people of Balochistan who are though bare handed but have a weapon of faith in their struggle of freedom and international peace.
sagaar
Posted by Sarbaaz Baloch at 14:05