FC raid Balochistan University, it is an attempt to shut all educational institutions of Balochistan: BSO 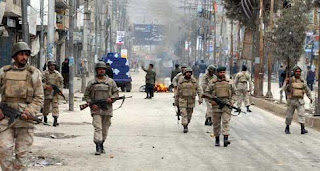 QUETTA: The Frontier Corps (FC) on Wednesday claimed to have seized remote-controlled bombs, hand grenades and explosives from a hostel at the University of Balochistan.
According to details, the FC raided at the boys’ hostel while it was closed for a two-month summer vacation. The raid was carried out following a tip-off by intelligence sources.
The FC recovered 10 hand grenades, two TT pistols, eight homemade bombs and a large number of explosives from Room No 1 of the hostel’s Block 3.

Raid: A university official, requesting anonymity, told Daily Times that the raid had taken place after taking the university management into confidence.
“Initial reports suggest that the room belonged to members of a Pashtun students’ group. We are trying to gather more information,” the official said, adding, “Since the entire hostel is shut, no arrests could be made.”
The Baloch Students’ Organisation (BSO) strongly condemned the raid, saying it was an attempt to shut all educational institutions of Balochistan and pave the way for a military operation in the province.
“No students’ organisation – Baloch or Pashtun – would be foolish enough to dump weapons inside university hostels,” said Salam Sabir, central spokesman for the BSO.
He told Daily Times that the FC had been attempting to acquire university land to build its new headquarters in Quetta, due to a lack of space in its existing offices. Sabir alleged that the FC had dumped the explosives inside the hostel rooms to justify taking over the university hostels.
Sabir said the university and its hostels had been shut for the past two months and the management had recently extended the holidays despite resistance from the students’ organisations that demanded reopening of the university.
He alleged that the FC had arrested at least 11 Baloch students since its deployment at the University of Balochistan.
“FC personnel had been using the boys’ hostel for residential purposes for the last two months. Whatever explosives were discovered from the university belong to the FC itself. We will resist the presence of FC inside the university because the university already has its own police,” he said.
http://www.balochwarna.com/modules/news/article.php?storyid=2152
Posted by Sarbaaz Baloch at 08:36