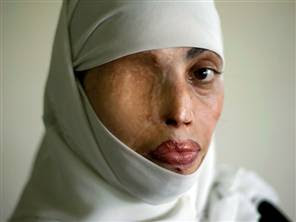 On 15th April 2010, the faces of two sisters were burnt with acid attack by unknown attackers near a village in Dalbandin, Chagai District, the attackers later on claimed responsibility with using the name of a unknown group called “Baloch Ghairth Mand Tanzeem”, this organization threatened the women and female members of society to remain in their homes and if found alone out their houses they will face Acid attacks.

The Baloch political parties and leadership believe that the attack was firstly to defame Baloch Independence struggle and secondly it was to create a fear among Baloch women activists who are actively taking part and interest in Baloch National struggle for Liberation. According them the attack clearly show that the enemy of the Baloch is very fearful of the mere fact that a large number of Baloch women are engaged in spreading awareness in Baloch society about the importance of freedom and equal rights.

Let us investigate the background of the incident; the incident took place in Chagai district of Balochistan, the largest and most backward district of Balochistan bordering Iran and Afghanistan. This district also hosts thousands of Afghan Refugees which include Taliban Sympathizers and most probably Taliban fighter as well, supported by Pakistani Intelligence agencies and Military.

Baloch Nation is known for its characteristics of being secular and progressive. In Baloch society women and non Muslim always enjoyed equal rights and were given due respect. In Baloch tribal code a Women is given so much importance that if two parties are at war and a women passes by or request to stop the war, both parties are bound to stop the war immediately. Similarly the non Muslims were protected against the Punjabi revolters during the 1947 partition of Indo-Pakistan by the Baloch.

Pakistani establishment and Intelligence agencies are continuously working on the Islamization and Thalibanization of Baloch Society in order to achieve dual benefit out of it i.e.

i. Undermine the claim of Baloch Nationalists in Pakistan and internationally by strengthening their natural enemies i.e. Islamic Radicals/Taliban

ii. Establish sanctuaries for the production and recruitment of Jihadis and Extremists to be used for International Jihad Supervised and managed by Pakistan’s wicked intelligence agency the ISI.

The attempt show Baloch Society infected with Islamic extremism is mainly important for what such accusations are trying to achieve politically: they could serve to mobilize international support for Pakistan, particularly from the United States, and neutralize opposition to a Pakistani military intervention. The charges are part of a larger effort to discredit Baloch nationalism. They should be seen alongside Pakistani attempts to use the specter of Islamism to undermine the claims of Baloch nationalism in Pakistan and internationally.

In past few years the activities of “Islamic Thabligi Jumaat (Islamic Preaching’s Group)” has increased in Pakistan which is the main catalyst for the spread of Islamic extremism in the region. One finds it surprising that the preaching activity of the “Tabligi Jumaat” are increased in the areas of Balochistan where the Pakistani military finds more resistance from the nationalist forces, hence using the tool of religion to undermine Baloch nationalism is frequently used. Just as we witnessed after the murder of Ghulam Muhammad Baloch and Companions, nationwide revolts against the occupation forces started, the“Thabligi Jummat” also started their large scale preaching processions in the areas where the tension was more severe like Pangour, Turbat, Khuzdar & Noshki, but no such processions were held in calm areas like Naseerabad, Jaffarabad, or Kharan.

It’s the time for the Baloch Nation and the nationalist forces to drive a strategy to counter the efforts of the enemy to radicalize the Baloch Society as well as combat the forces spreading radicalism and those behind crimes against women & marginalized groups of Society.